Katsuo Umino is a pig-like chef from the Tsugaru Branch (in the northern Aomori prefecture) of Pantasia who is present in the first arc of the anime. Kazuma Azuma liked him because he was reminded of his pet from back home, Sanpi.

He is initially eliminated from the beginner's competition because the vinegar he used as a preservative was reduced during the dough-kneading and there was an inadequate amount left to keep the dough from being taken over by bacteria. Ryou Kuroyanagi also hates the taste of vinegar in bread.

Later when he (and some other unnamed eliminated chefs) beg to be allowed to compete. Kazuma says they should be able to, since travelling all this way proves he has guts. Ryo disagrees and orders security to drag him out. Katsuo is so determined that he bites the door frame with his teeth to assist his arms in clinging on to it. He cries that he can't go back home like this!

Ryo issues the ultimatum that they must eat their spoiled bread to make up for their mistake. Katsuo is the only one of the group willing to do so and rushes forward, able to sniff out his spoiled pot by the smell of vinegar. The other chefs stay at the door, saying it's not worth it.

Plunging his open mouth towards the garbage can full of moldy bread, he shouts "oka-chaaan!" (mom) while weeping for his life. Everyone is shocked by his guts. In the last moment, Kazuma intervenes, jamming a rolling pin between his jaws to save his life. He says again this proves that Katsuo has guts, sticking up for him, but Ryo doesn't agree, saying Kazuma shouldn't speak as merely a latecomer.

A voice speaks from the crowd to give him one more chance. "Meister Kirisaki!?" Ryo exclaims. But it was actually Ken Matsushiro in disguise. Ryo is unwilling to listen to Ken, saying they were finished two years ago. But then Ken whispers that he will reveal a similar embarrassing incident of groveling by Ryo in the past when he was his student, thus blackmailing Ryo into letting Katsuo compete.

Katsuo later goes far with his sense of smell, as he is able to smell out the best kind of butter in the world for the elimination. Kyousuke Kawachi pics a different one, which while not the best, is better for the kind of bread they were supposed to bake. Kazuma picked margarine.

The group is later astounded to find out, in episode 18 of the anime, that he's actually 31 years old (older than Ryo, the same as as Ken and twice as old as Kazuma) and has an extremely attractive wife. Sa-chan comes to the competition to cheer him on, calling him "darling" (anata) while he calls her "momma" (oka-chan/ka-chan).

He met his wife while working at the Sugaru Branch of Pantasia. Sa-chan was a part-timer there. She liked his bread and they fell in love. They got married after three months. Katsuo is apparently competing to win the part-timer's competition to impress his wife, who promised to do "this and that" if he was victorious. Sa-chan confirms this but she says it was a secret, embarrassed.

Ryo is outraged that people would get married while only working part-time. Kyousuke is outraged that they waited so little time to do so. Ken just declares he's fired. Kazuma regrets helping him get back in the competition.

After learning this, Ryo simply declares that Katsuo loses the competition (without actually having tasted any bread), which the others seem to think is wrong. Ryo declares he didn't lose his cool though. Dave Hashiguchi graded Katsuo's dish as -500 points, unable to scream since it sucked so much. 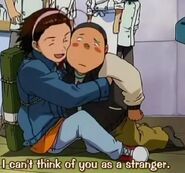 Katsuo gets his forehead punched by Ryou Kuroyanagi

Katsuo introduces Sa-chan to everyone 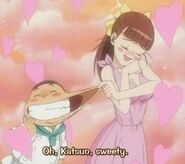