Ryou Kuroyanagi (黒柳 亮 Kuroyanagi Ryō) is the 22-year-old head at the main Pantasia branch and a Harvard graduate with a degree in food sciences (he had a girlfriend named Cathy, but they got separated when he needs to go back to Japan).

Ryou is a handsome tannish-skinned young man with short black hair that has bangs hanging on either side, small brown eyes and he wears the Pantasia Head uniform with a blue scarf around the neck.

Ryou is a very serious guy whenever he is making or judging bread who gets very angry when Kazuma Azuma keeps calling him an old man, reminding him that he is merely 22. His strait-laced no-nonsense attitude belies his very silly quirk of making strange pun-based reactions to the delicious bread he's eating (during the match in Uppurui he married an extremely ugly woman just for the sake of a pun, getting a divorce five minutes later).

While studying in America, Ryou had a girlfriend named Cathy, but they separated when he graduated and returned to Japan.

His passion and talent is food tasting, in which he excels at.

He has incredible physical senses, as he could deduce the cooking and fermentation times as well as the proportions of ingredients of a loaf of bread just by smelling it: he is even used as a sniffer to track down a runaway Suwabara during the match in Ōmagari.

He used to be the student of Ken Matsushiro, but Ken drove Ryou away with his behavior and he is given the opportunity by Yuuichi Kirisaki to fully utilize his skills as a judge for the Yakitate!! 25 competition (Episode 9 in the anime).

Both Ken and Tsukino called him a bread zombie and he is also one of the many people who make fun of Kyousuke.

In Episode 21, Ryou was sent to Heaven at a young age as he (along with Dave (a fellow judge) and Umasaburou Azuma) "died" from eating Kazuma Azuma's bread (Japan #44) because it tasted to die for.

After he dies, he meets Satsuki (who bears a resemblance to Cathy) and they fall in love, but he regains consciousness after a certain period of time, alongside Dave. 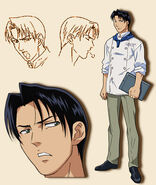 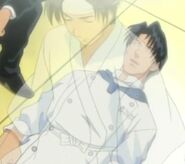 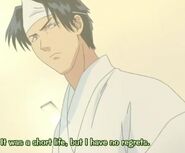 Ryou "dies" with no regrets
Add a photo to this gallery
Retrieved from "https://yakitate.fandom.com/wiki/Ryou_Kuroyanagi?oldid=6719"
Community content is available under CC-BY-SA unless otherwise noted.