Tsukino Azusagawa ( 梓川月乃, Azusagawa Tsukino) is a baker and the daughter of the owner of the Pantasia chain, and understudy to Ken Matsushiro, who has difficulty getting along with the rest of the Pantasia-involved Azusagawa family because she is an illegitimate child. She is still very dedicated to the Pantasia chain, seeking out talented new bakers (like Kazuma Azuma and Kyousuke Kawachi) and she has garnered the support of many other characters. While she stays behind the scene most of the time, she is implied to be talented as she managed to make it to the third place of a past newcomer's battle at a very young age.

Tsukino has long flowing light brown hair, green eyes and one of her distinctive style is that she always wears ribbons.

Tsukino appears to be the prettiest of the Azusagawa sisters that many men find her attractive as it is proven where she was able to charm them out into trying Kazuma Azuma's Kabukiage bread at their store.

Contrast to her sisters (in which hate her due to her 'thieving-cat' mother), Tsukino is a good-hearted and forgiving girl who is also implied to be a good baker, which is a good example is before the newcomer's competition in which she was said to have come 3rd place a few years ago.

Tsukino's mother died 4 years before the current time in the series. Although her grandfather loves her the most (as he loves all three of his grand-daughters), it seems that her own father takes little notice of her where he favors Mizuno Azusagawa (Tsukino's younger sister) much more. Therefore, she has no family, although Ken Matsushiro (the manager of her branch) purposely decided to work there to act as somewhat of a family-replacement figure. 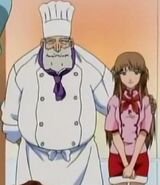 Tsukino with her grandfather
Add a photo to this gallery

Retrieved from "https://yakitate.fandom.com/wiki/Tsukino_Azusagawa?oldid=6697"
Community content is available under CC-BY-SA unless otherwise noted.